Can't believe it's been over a year since my last post!!!

The boys are both a year older and so are we! We still live in the same place and still have the same two cars (albeit with a few more scuffs and scratches), the boys still go to the same school and our new mode of transport to get there are scooters. 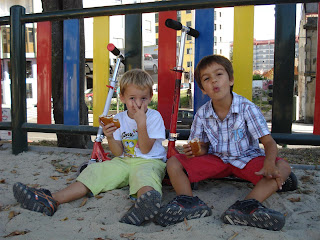 The Coia Marathon for Kids 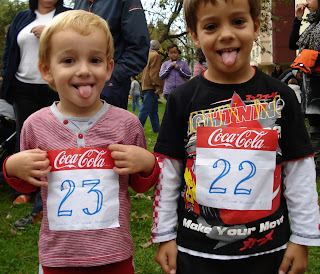 Today was the annual Coia Marathon for Kids. R and W competed in the 3-4 yr old category.

R was able to finish the demanding 200m course under his own steam.

While poor W, who was swamped at the start line by overprotective parents, (trying to get their child into the best possible position prior to the starting hooter) lost his confidence and had to be guided around the course by Mummy's loving hand.

Both boy's received a medal and a bag of goodies!

After the marathon it was off to the local cafeteria for a much deserved Spanish Omelette for R and Chocolates for W. 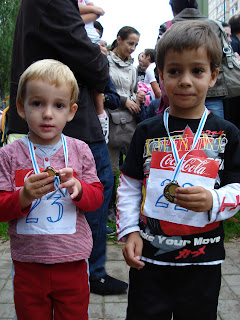 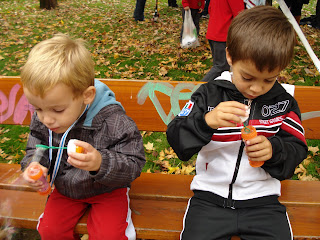 Two boys and a camera

Having been doing far to many other important things lately, rather than writing in this blog. I have once again been neglecting my writing duties and I see that it has been months since my last entry.

A month or so back little W came up to me and said.

"Daddy, here is your camera"

"On the table" he replied.

"Where I left it?" I inferred.

Upon the conclusion of the conversation he holds the camera with outstretched arms and as I reach out to take it from him, he lets go and before I have a firm hold, the camera falls to the parquet floor lens first ("oopps" he said.) with a cringing crack.

I quickly retrieved the camera from the floor, as if this very action might actually prevent the damage that has already been caused but alas the lens has an angle that could be best described as not exactly true.

Surprisingly the camera was still working and the lens would retract, even though it was a bit more of a struggle for the little machine.

I then had the brilliant idea that a little gentle persuasion would encourage the lens to find its true position again and all would then be righted. Unfortunately, this was not to be, as my so called gentle persuasion became rather less gentle as the lens proved more difficult to straighten than anticipated and my gentle persuasion had descended down the evolutionary ladder to brute force.

This extra applied pressure resulted in a best to be described as "SNAPPING" sound, which resulted in the lens taking on a mind of its own, depending on the angle at which you held the camera.

"Daddy broke it?" he asked.

Visitors other than my parents!

My aunty and uncle were over staying with us last week. They visited us at the end of a 5 week holiday where they had been travelling through Sweden as part of a Rotary International group. They then spent 10 days travelling the Danube to Budapest before catching a plane and winging their way to little old Vigo, thus becoming our second visitors from New Zealand other than my parents. The other being an old friend who came to see us after completing the pilgrimage to Santiago from London by bicycle.

We enjoyed 7 short days of catchup, after nearly 7 years of virtualy nil contact,it was great to see them. It was interesting to watch R & W's reaction to these strangers. R's observation "Daddy they speak English!" or to William, who at first thought they were Grandma & Grandpa and then couldn't fathom out why they hadn't brought Xmas presents like Grandma & Grandpa and was most pertubed after extensive searching of the room, that there were none.

Here's a photo of the boys new summer look...the number 2... 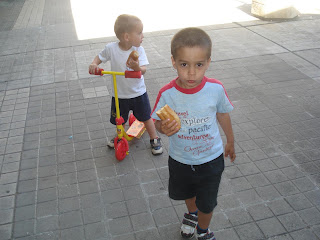 What better way to spend Mother's Day than to go and have a lovely lunch at a lovely restaurant in lovely surroundings, on a lovely day and then top the day off with a climb to the top of a mountain (large hill). Well that's what we did this year for Mum's special day! The boys thought it was a great adventure and thoroughly enjoyed themselves, Mum (understandably) on the hand didn't agree entirely with our expedition.

We had lunch at a wonderful winery/restaurant in the O Rosal wine region... 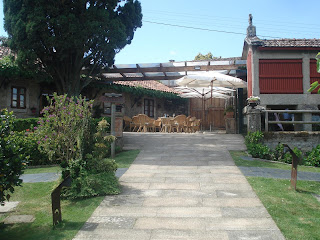 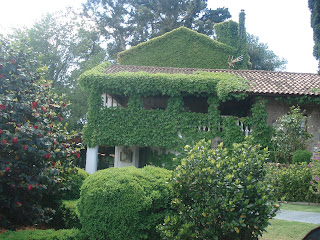 ...Along with our climb to see the Muiños (water mills) do Folon y Picon the largest collection of its kind in Europe (so I'm told). 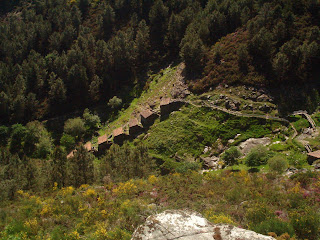 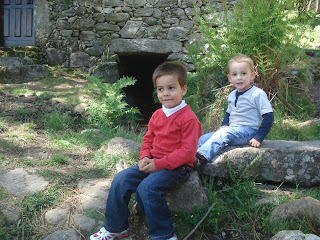 R was a little champion. He walked all the way to the top and all the way back down again, very proud we were of that feat! W's little legs just couldn't keep up and was soon asking for Daddy's arms. Daddy's arms and back took a few days to recover but we all had a great day out and that night we had two very tired boys, who slept right through till morning! Mind you so did Mummy and Daddy!!!

It has been nearly a year since I last wrote my humble thoughts on this here tablet. I feel that a change is in order. I am going to be focusing on our life here and especially focusing on our two beautiful boys, so that family and friends on the far the far side of the world don't lose touch.
Posted by Brendan at 02:53 No comments:

This is a quick post to add a video clip from Televison de Galicia about our recent cricket match played here in Vigo!

You can see me at the end of the clip, in the group shot, standing on the far left! My five seconds of fame!

Take a Look Back